FOCUS ON INNOVATION: Exoskeletons at RATP

How the RATP group is improving working conditions for its staff 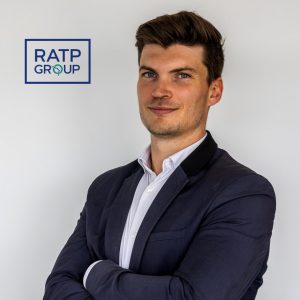 Nicolas Stuyvers has a background in engineering and specialises in industrial and mechanical engineering. He has been with RATP for four years now, and works on major train maintenance and repair workshop projects. For the past year, he has been heading up the New Physical Assistance Technology and robotics programme (NTAP), one of RATP group’s priority innovation programmes.

Since 2020, RATP has been experimenting with the use of exoskeletons, particularly for door maintenance for the express metro RER A line at its Sucy-en-Brie, Rueil-Malmaison and Torcy workshops.

Nicolas, what’s the thinking behind the NTAP programme?

The programme is structured around several types of technology: exoskeletons, cobotics (also known as collaborative robotics), in which robots work alongside humans, and smart robotics. We’re also working on augmented reality, virtual reality, and what is known as connected PPE (personal protective equipment), which gives a range of status reports for wearers: heart rate, muscle strain, and so on. The ultimate aim is to improve working conditions for staff.

What is an exoskeleton? How does it work? What is it used for?

Originally, exoskeletons were used in the world of medicine as prosthetic devices, especially for patients suffering from loss of mobility. Gradually, the technology has expanded to other areas, and a market has developed in a whole range of industries.

An exoskeleton relieves and decreases the physical strain that can be experienced at a workstation. At RATP, for instance, exoskeletons make the work of maintenance staff much easier. There are two families of exoskeleton:

What are the major stages required to implement a programme like this?

Exoskeletons are a last resort. The first stage is to adjust the environment, tools, or rolling stock where possible. Collective solutions are a priority, too; exoskeletons are for individuals.

If a workstation is too arduous, the employee in question will let their manager know. A human factors specialist will look at the posture of the operator during the production cycle. This allows an initial diagnosis to be made, assessing which limbs are subject to the most strain.

An integration protocol is then created. First, we test exoskeletons for two or three on-site employees. We measure heart rate and muscle strain to see whether the exoskeleton mitigates these. If the overall result is positive, we carry out wider testing on several sites using the same methods. Then a decision-making body is convened to decide whether to deploy the solution as part of standard practice.

How have employees responded to exoskeletons? What further improvements are needed before a full rollout of this type of technology?

There are various phases involved in innovation and transformation. Initially, there’s interest, and a degree of emulation: people are interested in new technology and curious about it. We’re always very well-received, with plenty of volunteers for experiments; we’re seeking to maintain this dynamic.

Once we start testing the technology, some very practical questions arise. Typically, an employee may use one tool instead of another depending on how long it takes to adjust and install, and how comfortable it is to use – and also depending on how the wider group sees the tool in question; the social dynamic is very important. For instance, if an employee uses an exoskeleton, this may be perceived as a sign of weakness by others. Our role is to overcome these prejudices and support transformation.

What are the next steps?

We’re hoping to industrialise our first exoskeleton to support raised arms by the end of 2022. However, I should emphasise that this is an innovation in progress, so there are a number of factors still in play: integrating teams, the advantages for companies, and so on; there are several unknowns to be overcome before deployment. The RER A project is the most advanced, at the Sucy, Rueil, and Torcy workshops. Some measurements still need to be made, and we need to verify that there are genuine benefits. If all goes well, we’ll move on towards industrialisation.

This website uses cookies to improve your experience while you navigate through the website. Out of these cookies, the cookies that are categorized as necessary are stored on your browser as they are essential for the working of basic functionalities of the website. We also use third-party cookies that help us analyze and understand how you use this website. These cookies will be stored in your browser only with your consent. You also have the option to opt-out of these cookies. But opting out of some of these cookies may have an effect on your browsing experience.
Necessary Always Enabled
Necessary cookies are absolutely essential for the website to function properly. This category only includes cookies that ensures basic functionalities and security features of the website. These cookies do not store any personal information.
Non-necessary
Any cookies that may not be particularly necessary for the website to function and is used specifically to collect user personal data via analytics, ads, other embedded contents are termed as non-necessary cookies. It is mandatory to procure user consent prior to running these cookies on your website.
SAVE & ACCEPT